On Wednesday, March 2, 2011 we received a call for an emergency dry ice blast cleaning service in New York State from a major power company. Just the day before a fire had caused damage at one of their urban substations. A transformer had caught fire several feet above two cooling plants. A major fire ensued resulting in significant smoke and fire damage.

From the time the fire began to the point it was extinguished, an hour had passed. The platform that the transformer was connected to was unstable as one of its beams had begun to melt from the fire. The cooling plants located below the platform were spotted with molten steel and other debris. In addition, the interior of the cooling plants was coated with soot and carbon from the fire. Some potheads were destroyed by the heat and others were coated in a thin layer of carbon from the massive smoke plume. The power company now needed to complete the cleanup, remove and replace power generation components and make sure everything was running properly before electricity demand goes up in the spring and summer months. The company planned on having the fire damaged section of the substation online by early April.

As stated previously, I was contacted on the 2nd of March to see if we would be capable of coming down on such short notice to conduct the cleaning of the two cooling plants and three potheads. The power company was planning on having us come down to start cleaning on Friday night, March 4th. I immediately got together a proposal for the cleaning based on phone conversations and pictures provided by the client.

Everything came together the day the cleaning was to commence. The power company was able to get us dry ice (very hard to purchase unless ordered in advance) and we had a diesel powered air compressor dropped at the site. Just after noon we left our facility in Worcester, Massachusetts and began the journey to New York State.

The ride was uneventful and for a Friday afternoon great on traffic. We reached the substation just after 5:30PM on Friday night. We checked in and then took part in a briefing for the fire damage project. The next step was to ensure that we had the correct ice, which is exactly where things started to get interesting. In two massive tubs was 2,000 lbs. of dry ice “Cheeto” pellets. We could not use this ice in our Cold Jet equipment. Fortunately enough, we were able to procure the correct dry ice at Continental Carbonics in Secaucus, New Jersey; however we only were able to get 1,600 lbs. We had brought 400 lbs. of ice with us from our most recent job. This gave us 2,000 lbs. to complete the job; I had figured we would need about 3,000 lbs.

After arriving back on-site, we were able to get setup. Within a few hours we started dry ice blast cleaning the first cooling plant. Some of the fire damage would not clean because the fire had fully compromised the metal. In other areas, failed paint peeled right off the surface leaving corroded metal behind. I was told that this cooling plant would receive an almost new coat of paint.

By 5:00AM we had started cleaning the second cooling plant. This plant cleaned much faster and looked significantly better than the first cooling plant after it was cleaned. The second cooling plant was located several feet away from the transformer fire, and was not in bad a shape after the fire. The carbon and smoke damage cleaned up very well in this cooling plant. Just after 8:00AM we had completed blasting of the two cooling plants. We disconnected our equipment and stored it outside of the work area. By 10AM we were off-site until 8AM the next day (Sunday). At this point we had just a bit over 400 lbs. to complete the three potheads. In addition, 2000 lbs. of dry ice was to be delivered from an ice vendor located in NY on Sunday morning.

On Sunday morning we arrived on-site just before 8AM. We began to setup and it began to sprinkle rain. Rain in some aspects can make dry ice blast cleaning far more tough than it normally is. However, we brushed it off knowing that the rain was not going to get worse until much later in the day. We began to blast using the remaining dry ice we had from the previous day. Rob Tucker, one of our dry ice blasting technicians went up on a scissor lift to clean the frontal areas of the potheads. This went extremely well and the potheads quickly returned to a near new condition. 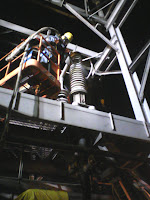 The ice delivered on Sunday was not able to be used in our dry ice blast cleaning system. Therefore we needed to get more ice in order to complete the cleaning. We had to contact our home office and setup a dry ice delivery of 1,000 lbs. to complete the last two potheads. It was late Sunday night, so the chances of getting ice for Monday were slim to none. We would start making calls the following morning to procure more dry ice. Shortly after 9:00PM we had run out of ice and began to pack up our equipment for storage. By 11PM we were completely done for the day just as the rain and wind were picking up for the night.

On Monday morning we were able to get the additional 1,000 lbs. of dry ice that we needed. It would be delivered mid-afternoon. The site manager wanted us back for 6PM so we could blast during the evening. On Monday night we went up in a boom lift to better reach all sides of the potheads. We completed the dry ice blasting of the remaining two potheads just after 4:30AM. We were all packed up and ready to go at 6:15AM. By 6:30PM we were back in Worcester after several days working on the emergency project.

If your company has a power generation fire with significant smoke and soot damage then give us a call at (508) 459-7447. We can review photos to see if the job is a good fit for dry ice blast cleaning. For more information about dry ice blast cleaning and the power generation industry visit Contract Dry Ice Blasting. You can also contact me directly at rtaylor@nitrofreeze.com.